I wasn’t sure about visiting the killing fields in Cambodia. It wasn’t something that I particularly wanted to see, but I was also intrigued, and knew that I couldn’t really go to Phnom Penh and not visit them.

Also, we were travelling with my sister and her partner Pete and he really wanted to see this part of Cambodia’s history.

But before we visited the Killing Fields, we paid a visit to S21 – the Tuol Sleng Genocide Museum. I hadn’t heard of this before visiting Cambodia, never knew it even existed.

S21 – Security Prison 21 – had started out life as a high school, in the centre of Phnom Penh. But when Pol Pot and the Khmer Rouge came to power in the 70s it was converted to a holding cell for those accused of crimes against the new regime. You know things like being too educated, questioning the new way of life, or asking what had happened to family members, that kind of thing. This was no ordinary jail. 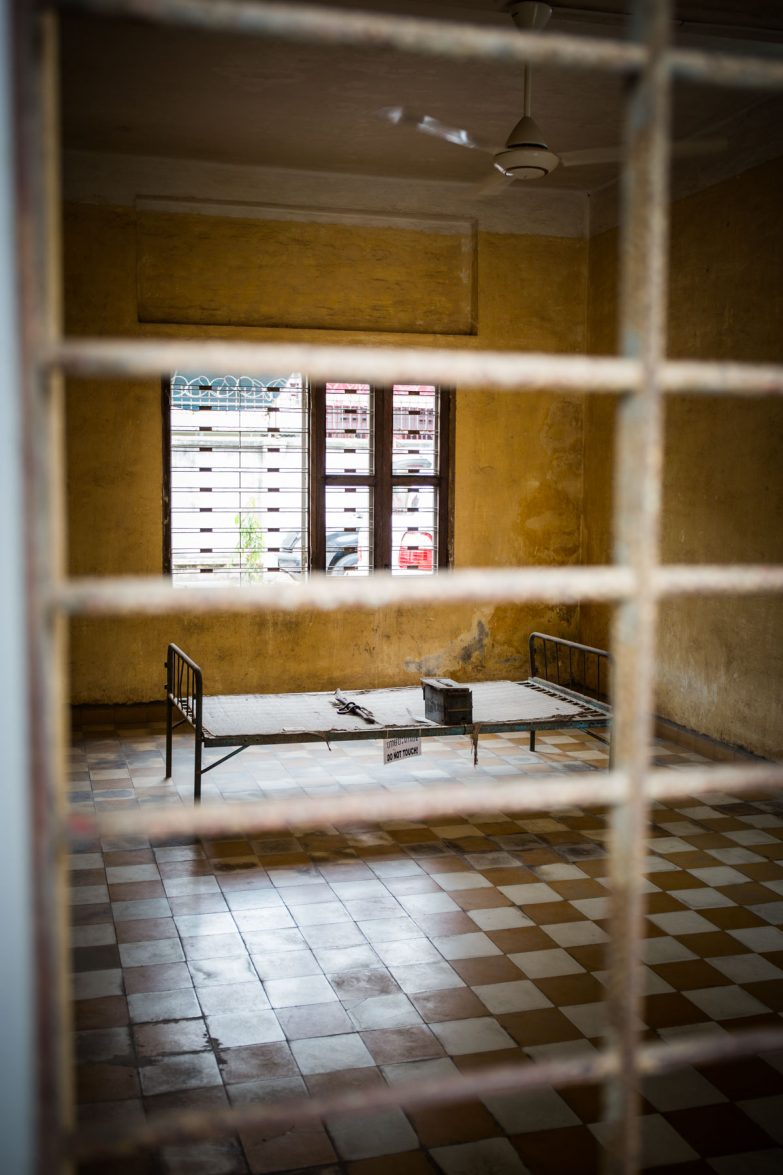 Inside one of the cells/classrooms at S21. 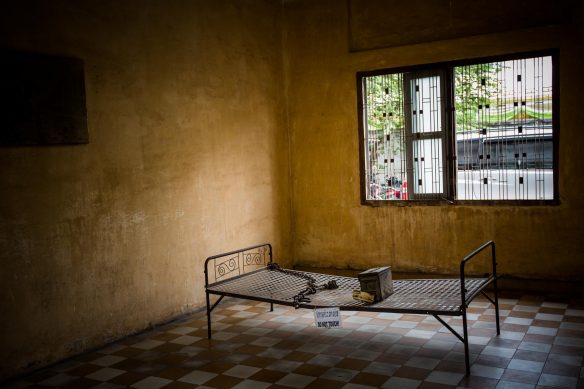 The rooms were used to torture the prisoners. 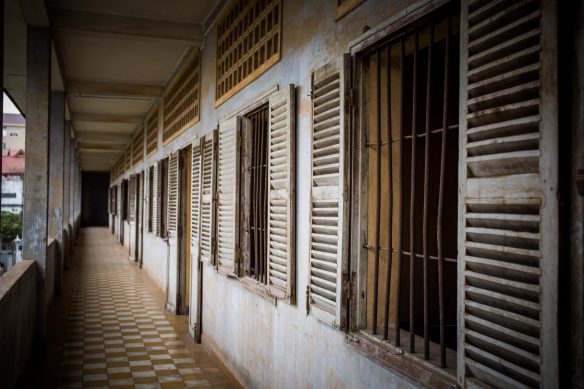 Outside one of the main blocks at S21. 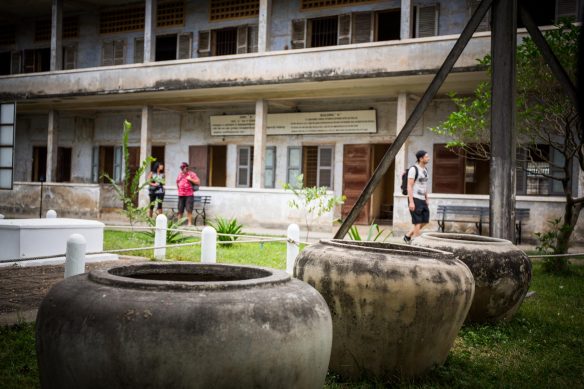 This may look tranquil, but these large pots were used to torture inmates.

The exterior may still have looked like a school, but inside this was a torture chamber. Men and women were brought here and beaten until they gave up the names of friends, family, community members who were working against the regime.

An audio device talks you through the harrowing stories and explains the different rooms. It’s difficult to explain the emotional impact this place brings forth.

I couldn’t go inside any of the rooms, I felt physically sick as I entered the first classroom/cell. A wave of nausea washed over me, so I looked into the rooms from the courtyards and listened to the stories that had made this place what it was.

It’s difficult to fathom how a regime can do this to its own people. Anyone that has been to the likes of Dachau or Aushcwitz in Europe – live museums to the atrocities that one human can commit against another – will understand the feeling.

We wonder why we go to these places, is it a morbid curiosity or a search to understand how anyone can do such a thing? We hope that they will stand as a reminder to all people around the world of what we humans are actually capable of; a reminder that we need to be vigilant in the future to ensure these histories are not repeated.

We knew it was going to be a depressing, heart wrenching day, but from S21 we moved on to Choeung Ek – the site of the Killing Fields. Arriving at Choeung Ek, the first thing I noticed was the solitude – an eerie silence surrounds the grounds. While the site is distressing, I didn’t find it quite as harrowing as S21.

Once again an audio device talks you through the site, revealing the disturbing history behind the now peaceful park. If you look closely you can still see bits of bone, fragments of the deadly secrets of the past. Structures along the way house the hundreds, thousands of skulls and bones, shoes and other bits of clothing that were found at the site. They bring home the extent of the atrocities that were committed. 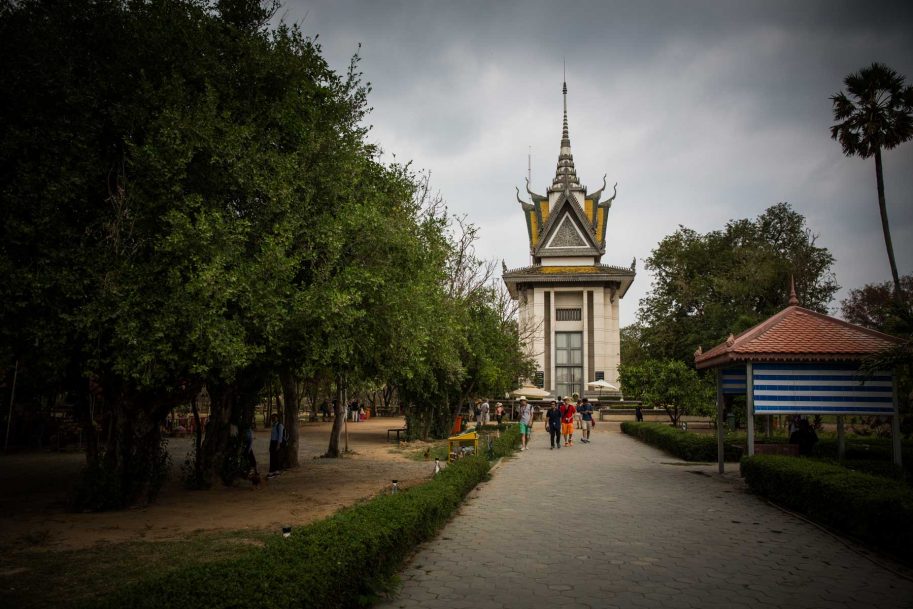 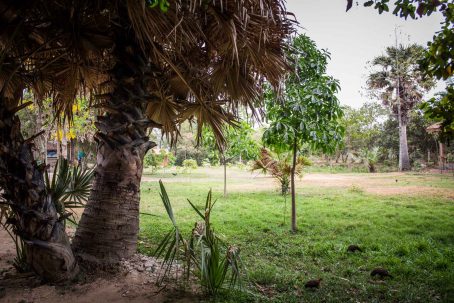 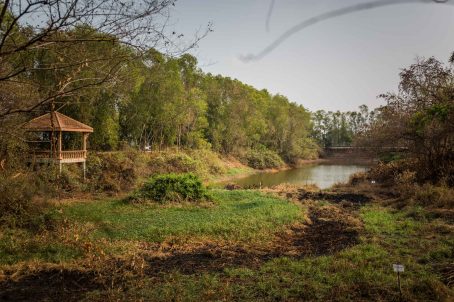 But perhaps it was the tranquillity of the setting, the open air and the country setting here – the healing effects of nature – that made it less harrowing than the stark urban setting of S21.

It’s hard to reconcile the brutal past of these sites with the beautiful scenery we see all around us; and the gentle nature of the people we meet in Cambodia. In the cities and towns that we visit we are surrounded by friendly, smiling locals. Yes, we meet people who lost limbs and family members during this time. Some of them tell us their stories, it’s always matter of fact and we are astounded by their stoicism.

Figures vary but we learn that about two million people – a quarter of the population – were killed from 1974 to 1979. 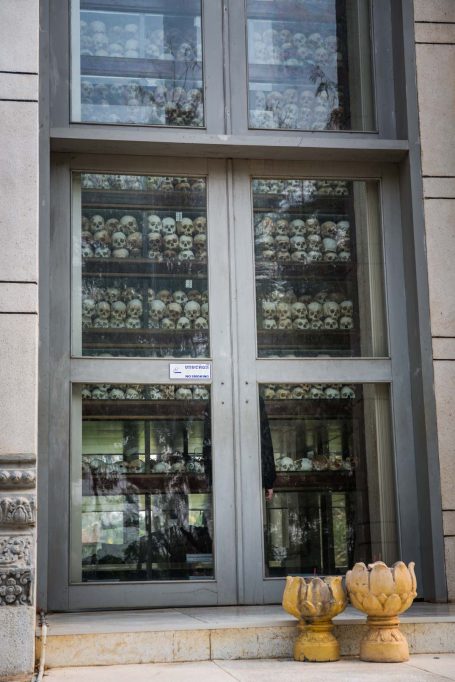 Remembering those that died on the Killing Fields. 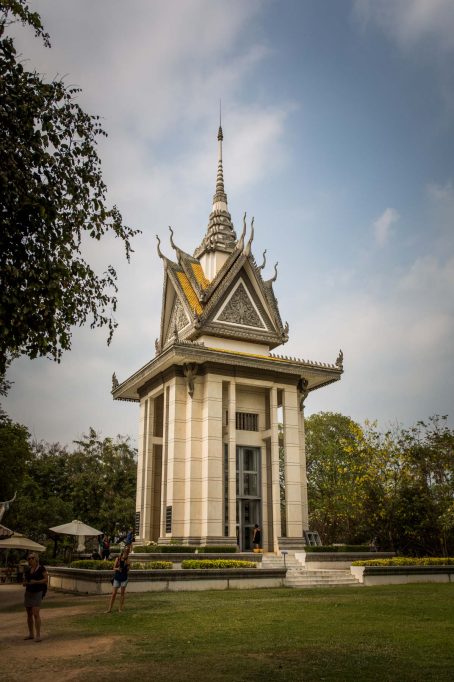 A memorial to the past. 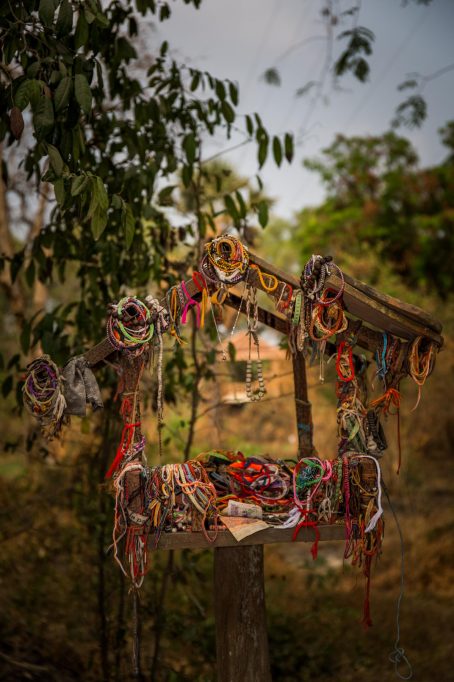 Items found at the site are a devastating reminder of the site’s history.

There is not a family in Cambodia that was not directly impacted by the acts of this time, and yet the people show a resilience that belies their brutal past. A warmth and happiness that covers their shocking history.

As distressing as it was, I’m glad I visited S21 and the Killing Fields. This is a part of the country’s history. It shows you what the locals have had to overcome and just what they have moved on from.

We stayed at the TeaHouse Urban Asian Hotel. While the rooms were very basic, the staff were helpful and the central areas were lovely.

We were in Phnom Penh for two nights.

Was it long enough? We saw everything we wanted to see in this time. I generally don’t like big cities, but Phnom Penh is very interesting.

Highlights: While heart-wrenching, S21 and Choeung Ek are worth a visit. The Royal Palace is also quite lovely, but be aware it has a very strict dress code.

Have you been to Cambodia? What did you think? Leave us a comment below.