Five awesome things to do in Switzerland

An afternoon in Lausanne

We were staying in Epalinges in Switzerland, just outside Lausanne so this post has to start there, right? And the only way into Lausanne from Epalinge is by the automated metro, which, according to my cousin Jon it is the steepest automated train line in the world. Yep, this train has no driver, which made me wonder, what happens if the brakes fail?

Fortunately they didn’t and we made it down, and back, with no problems.

The train line travels straight up, no turns, no flat sections, just straight up (or down, I guess, depending on which direction you’re travelling). 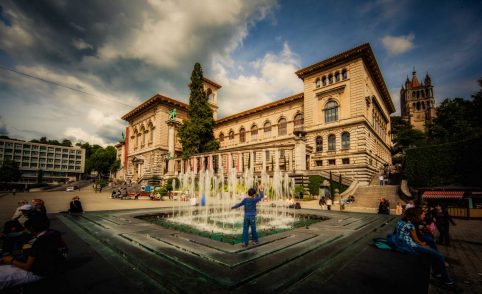 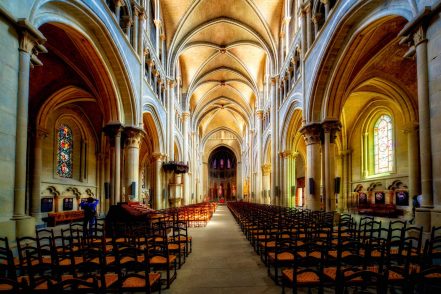 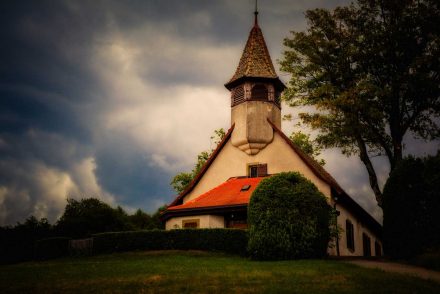 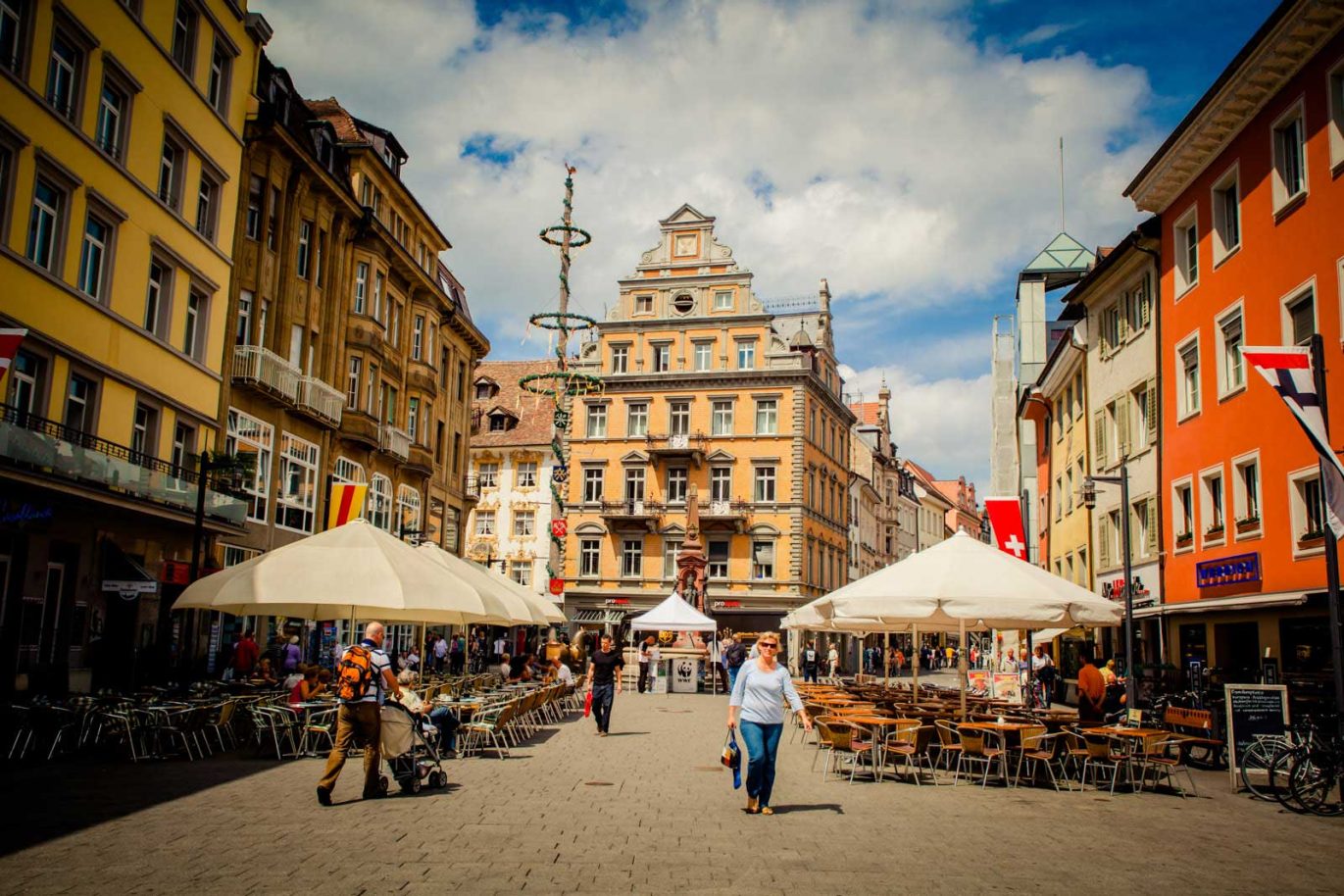 Lausanne is a big city with more than 130,000 residents. It has a cute old town, the centrepiece of which is the largest cathedral in Switzerland. It’s a gorgeous cathedral, and if you walk up the spire – yep more steps (!) you get stunning views over the lake and the mountains. The city centre is larger than we expected; the touristy parts – Ouchy and the old town – are separated by the non-touristy business-end of the city. So we only made it through the old town today – too many buildings to photograph!

We also wandered into the Natural Museum, an amazing building and the collections all looked incredibly interesting, unfortunately it was 4.30 and the museum closed at 5, we really didn’t have any time to look around – something we will definitely have to come back to!

When my cousin Jonathon suggested we visit Gruyere, I imagined we would be heading out to taste cheese – I had visions of Lactos cheese factory in Tasmania, so imagine my complete surprise when we arrived at a walled city and castle!

We did of course try the cheese – in the form of fondue – amazing, much better than I expected it to be.

Just before reaching the castle we stopped for a drink in the Geiger bar – owned by the man who did all the special effects for a number of movies including Alien. The bar really shouldn’t be missed – all kinds of heads in the wall, a skeletal ceiling… 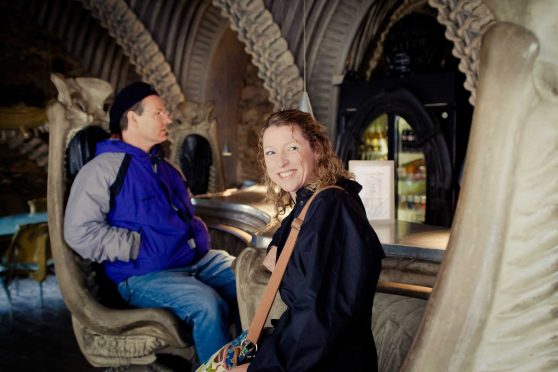 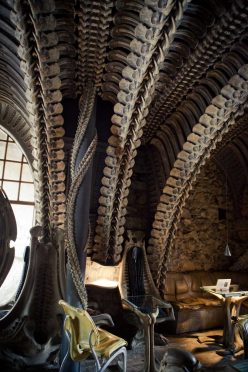 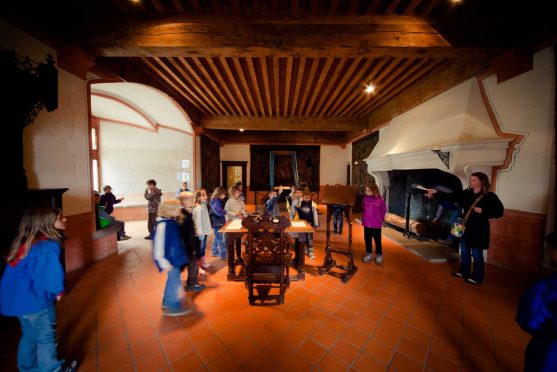 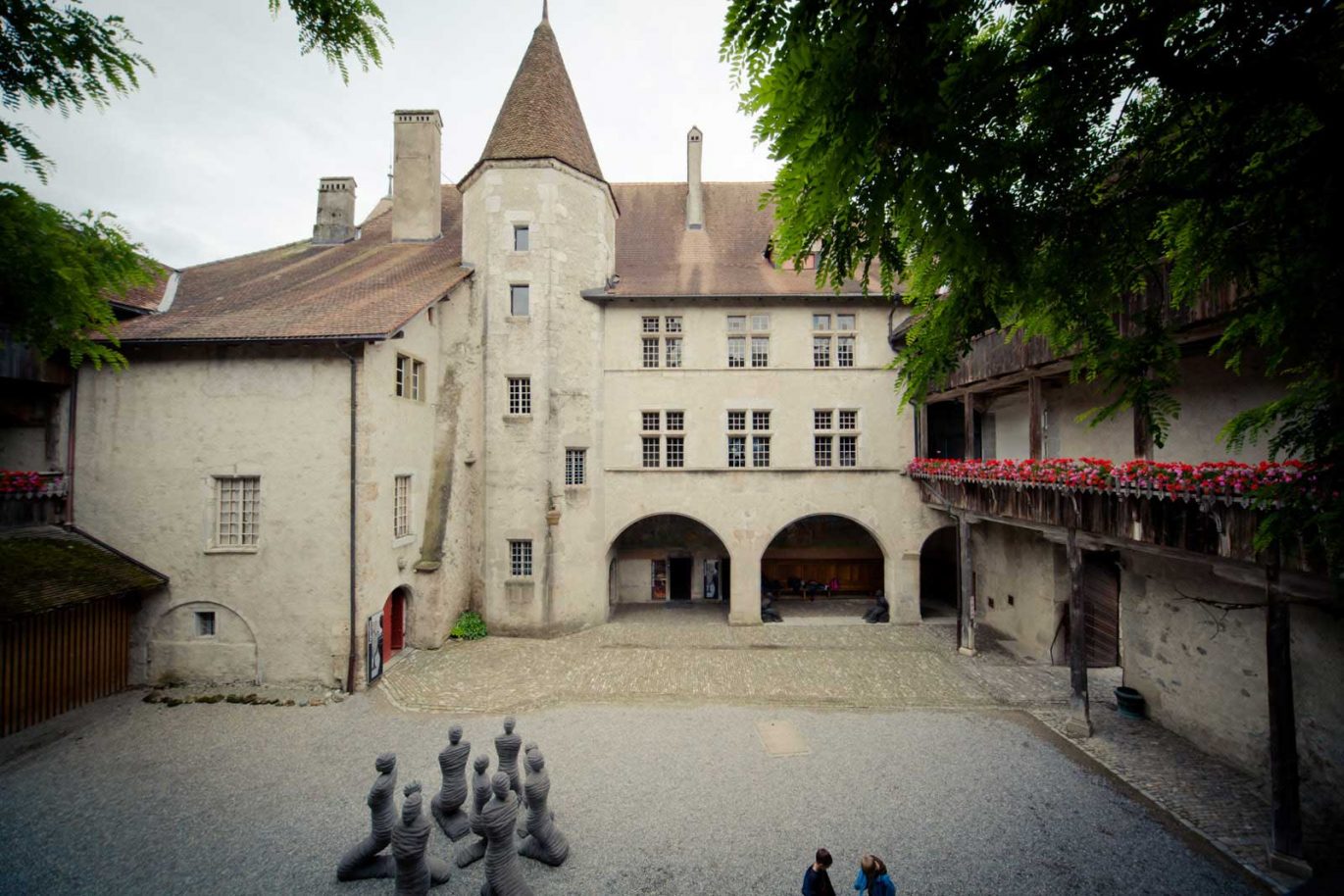 The castle itself is very interesting, built in 1270. You can wander through each of the rooms and unlike most museums or old heritage buildings here you can actually touch most of the furniture.

The views from the castle are also spectacular, across the old walled city, through the meadows to the surrounding mountains.

We spent an afternoon here and it was fabulous.

A Day in Bern

One of the things on our “must do” list for our trip to Switzerland was to visit Bern; everything I had read about the nation’s capital indicated it was a stunning old city.

Bern is only about one hour by train from Lausanne and it certainly is a stunning city. Bern means bear apparently, and the city is famous for the bear “pits” at one end of the city. Fortunately they have taken the bears out of the concrete pits and rehoused them in grass enclosures on the side of the river, while they are still not large enclosures, they are definitely a huge improvement on the old pits. 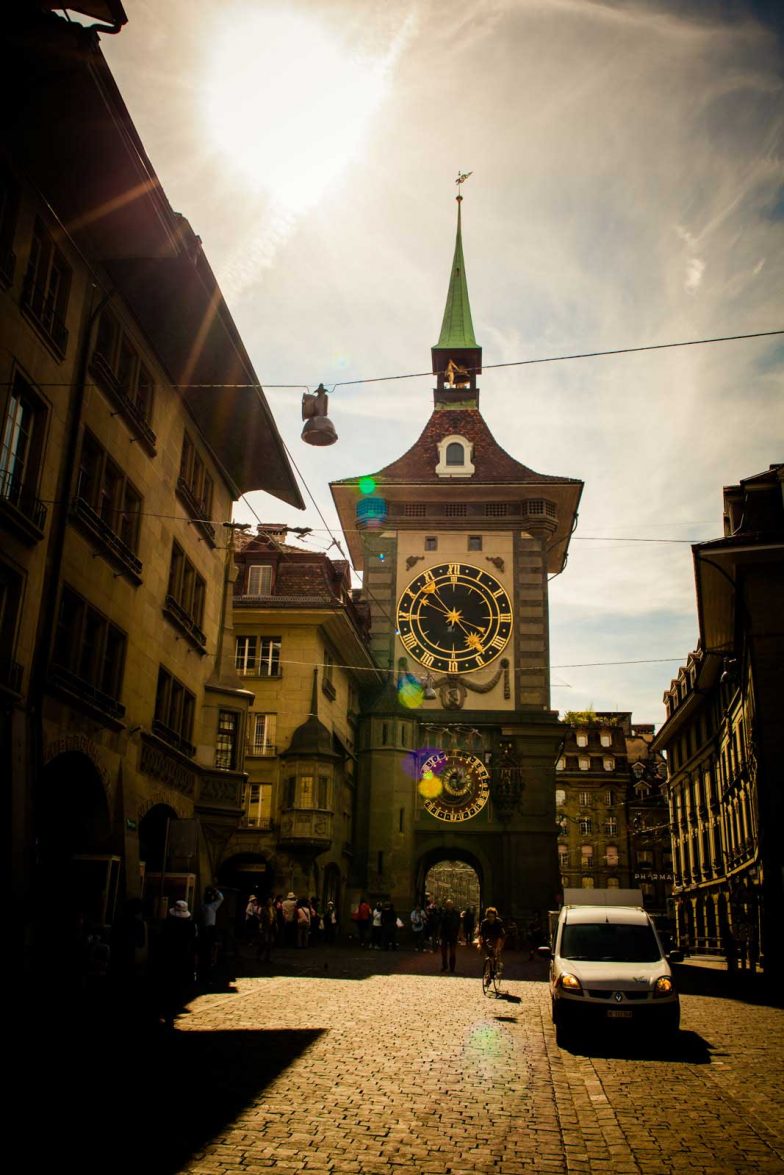 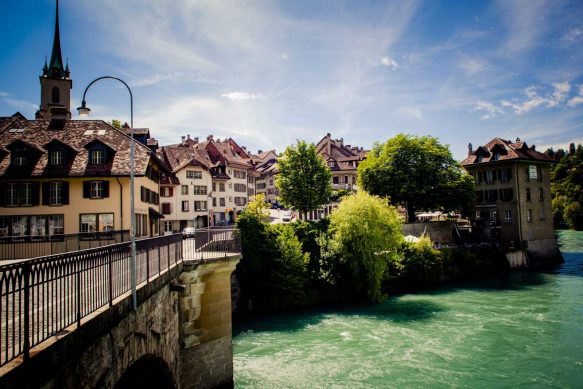 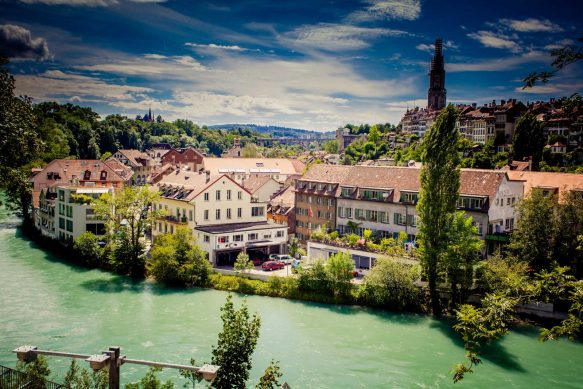 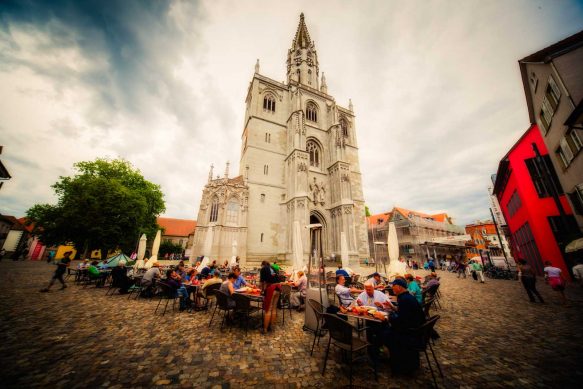 Of course Bern has a beautiful old cathedral and of course we had to photograph it from every angle! Apparently Bern also has the largest undercover shopping mall area in Europe – every city has some claim to the biggest or best of something and this is just one more thing that Bern apparently gets to claim!

It is a long stroll from one end of the old town of Bern to the other, and most of the way is full of shops and cafes, all housed in amazing old buildings, there are also various sights worth visiting on the way – Einstein’s apartment, the cathedral, etc. As for us, wee just like to meander through towns and admire the buildings and watch the locals going about their daily routines this was certainly a lovely town to do that in.

A day at Chateau de Chillon

You really can’t miss Chateau de Chillon in Montreaux when heading to this part of the world. Perched on the edge of Lake Geneva it is a stunning castle that actually sits on its own island.

We had travelled passed it via car and train and were anxious to have a look. Rick Steve’s guidebook also recommends this far and away above the Chateau at Gruyere, so we figured it must be something special. 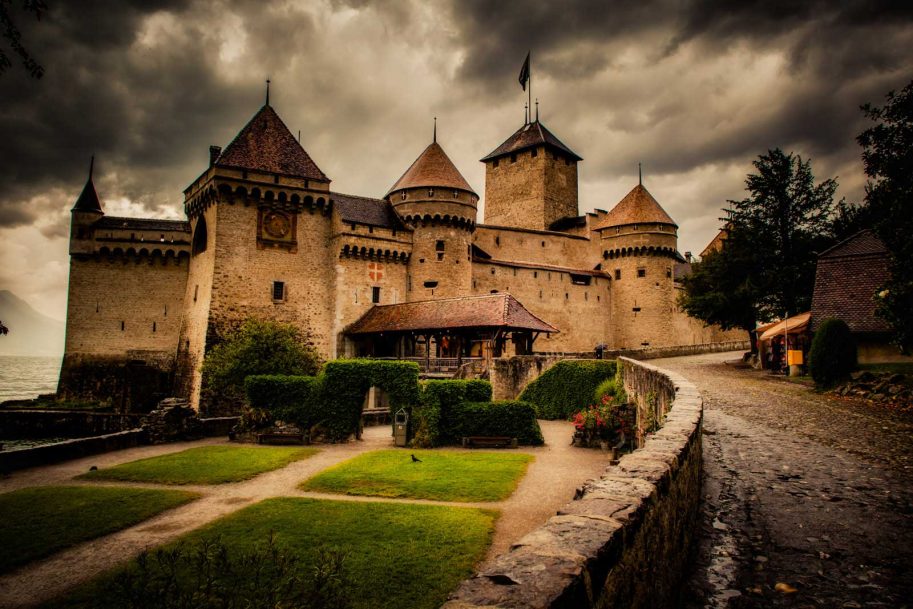 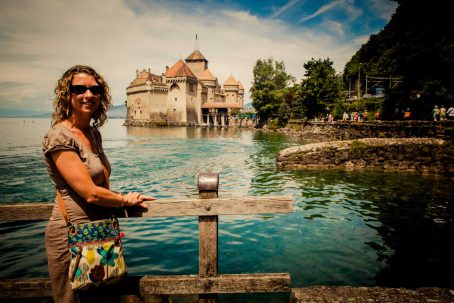 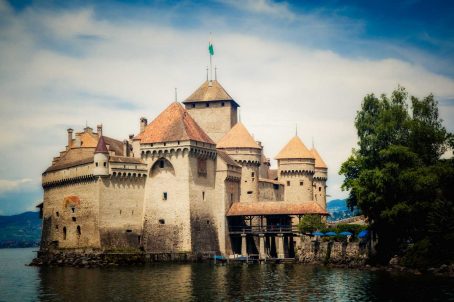 The Chateau doesn’t look that big, but inside there is room after room and courtyard after courtyard.

From the keep – eight stories high – you get great views over, yep, the mountains and the Lake. The Chateau dates back before 1005 (the oldest parts have never been dated) and was used both as a prison and a palace but is perhaps most famous for the poem penned by Lord Byron, The Prisoner of Chillon. The Chateau is now owned and operated by the Vaud Canton.

It provides a really interesting glimpse into the history of Switzerland, and the landscapes and views are to die for!

Tripping through the Swiss vineyards

I found a new favourite place in the world in the Lavaux vineyards. The vineyards are Unesco world heritage listed, 1000 years old, and they are truly beautiful – small towns dotted between miles and miles of wineries hanging to the sides of mountains overlooking Lake Geneva and the mountains of France. What could be more spectacular? 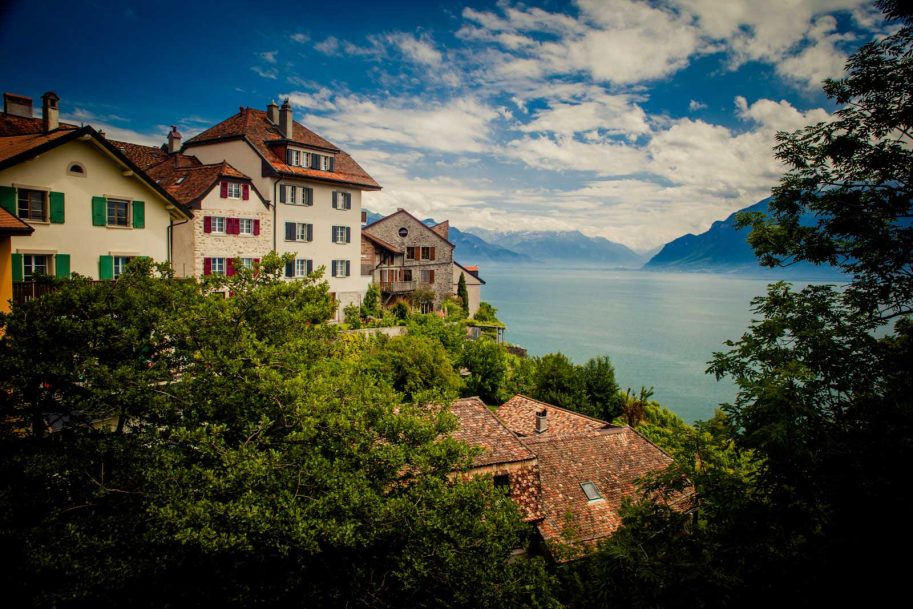 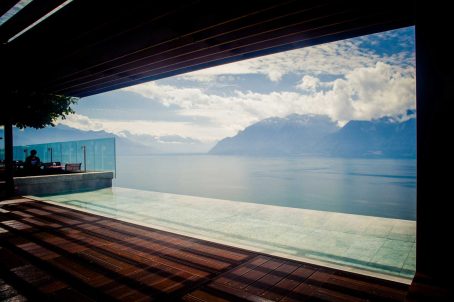 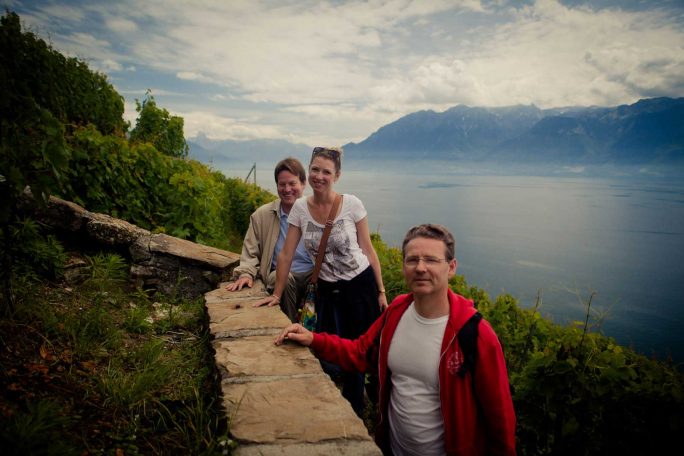 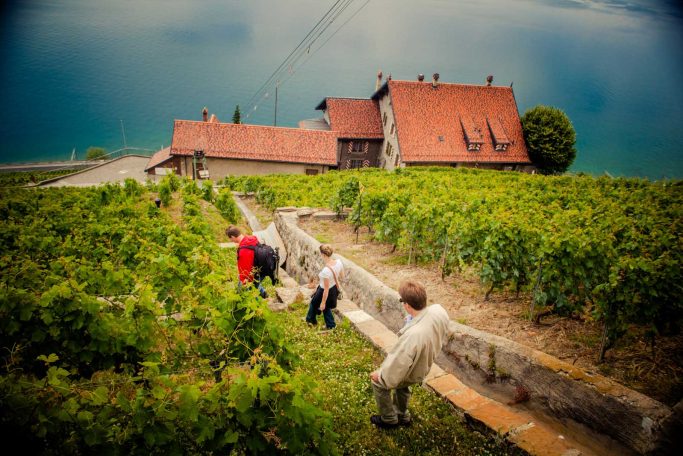 Unlike most of the wineries at home in Australia, here you can wander through the actual vines, making your way from one winery down to the next.

We parked the car and walked up to the Deck bar and restaurant– from here we had amazing views across the vineyards down to the Lake. The bar itself is very modern, in complete contrast to the traditional buildings of the nearby towns.

After a quick drink we made our way back down through the vineyards, through more small towns and eventually back to the car.

Each town was unique, but all had a Tuscan feel with stone buildings clinging to the roadside – roads wide enough for just one car to pass through.

There are more than 30 kilometres of vineyards in the region and the overall effect as you drive past, or wander through them, overlooking Lake Geneva and the mountains as a backdrop, defies words. It is absolutely breathtaking. Now, if I can just find a way to spend more time there!

We were based with family in Switzerland, but took a number of short trips away.

We were here for three weeks.

Was it long enough? Switzerland is one of our favourite places, so no amount of time could ever be long enough. Three weeks was definitely more than long enough in Lausanne, but there was a lot of the country that we didn’t get to see.

Highlights: Traipsing through the vineyards, those mountains and the stunning Chateau de Chillon.