A quick trip to Konstance

Our trip to Konstance (Konstanz) in Germany was unexpected. We had arrived the day before at my cousin, Jonathon’s, place at Epalinges in Switzerland and he was due to speak at a conference in Konstance so we figured we would tag along, take the hire car and see some of the local countryside.

We had to stop at Zurich airport to change hire cars, but even with that stop, the trip probably only took about four hours. Coming from Australia, the thought of driving four hours into another country is unthinkable – it takes longer than that to drive into another state.

The drive through the Swiss and German countryside was stunning – passed snow-capped mountains, castles and cow-filled meadows. It’s the picture postcard stuff you imagine of this part of the world, but it is even more beautiful than the pictures depict.

Konstance is a charming historic little town on Lake Konstance. The lake itself forms the border of Germany, Switzerland and Austria – what a position. We spent half the day meandering through the old town of Konstance, marvelling over the buildings, which date back as far as the 1300s.

From the top of the Cathedral spire – 42 metres high – you get amazing views over the city and the lake. You can walk up higher, to the balconies in the spire – at about 56 metres. I had to laugh as Adrian had an indepth discussion with a man on the balconies all about camera equipment – the man didn’t speak a word of English, Ade doesn’t speak a word of German, but they spoke the universal language of Canon. In the afternoon we headed to Appenzell, back in Switzerland. We soon discovered that driving on the opposite side of the road to that which you are used to is not so easy (at least according to Adrian – I didn’t want to tackle it!).

It’s not the driving that’s the difficult part apparently – it’s having to change gears with the right hand. We made it to Appenzell though without too many problems – again a stunning drive through the Swiss countryside.

Appenzell is a gorgeous and very traditional Swiss town, which dates back to the early 1100s, in the 1500s the town centre was destroyed by fire, but the buildings were quickly rebuilt and still stand today as they did then.

The town is surrounded by snow-capped peaks giving it a truly Swiss appeal. One of them is Ebenalp, reached by cablecar. The views are beautiful, and the walk up to the gasthaus is truly spectacular.

But what really sets this apart is the cave in the side of the mountain in which they found prehistoric bear remains and the remains of early hermits who had lived in the caves. The caves – the Wildkirchl Caves were apparently inhabited about 40,000 years ago. 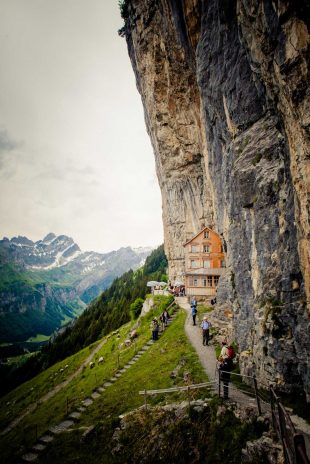 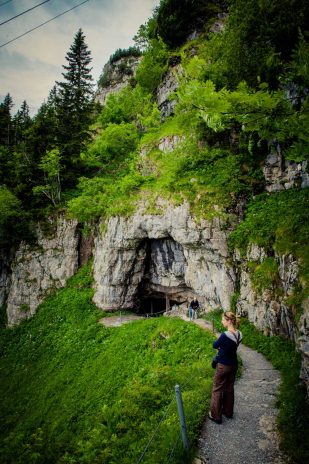 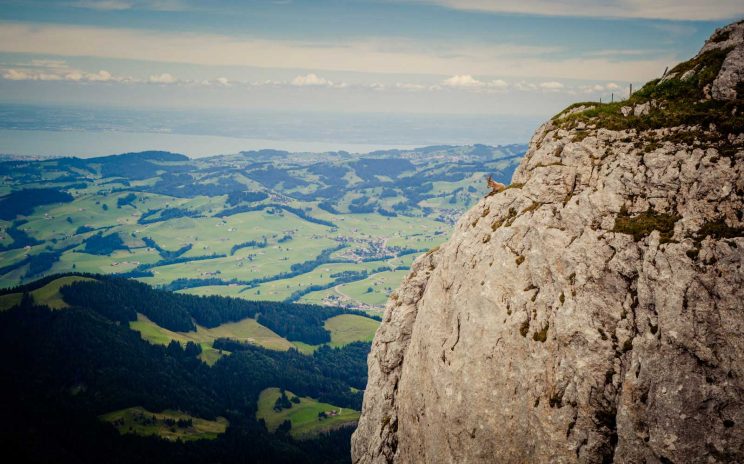 Here we stopped to have a drink and a rosti, with the sound of goat bells ringing around us, and watched the dark clouds roll in.

Despite the clouds, the next day we persevered and headed up Hoher Mountain at 1795 metres. The trip out to the cablecar was spectacular – green meadows, meandering cows- you get the picture…

The cable car took about 20 minutes to get to the top, for at least the first 15 minutes we had clear views of the valley below, but for the last five – nothing, we were surrounded by clouds. This set the scene for our experience at the top. You could see a few feet in front, but not much beyond that.

Hoher Mountain is home to a revolving restaurant so we stopped for coffee before heading back down on the cable car and walking to the nearest train station – a 40 minute walk through green meadows. 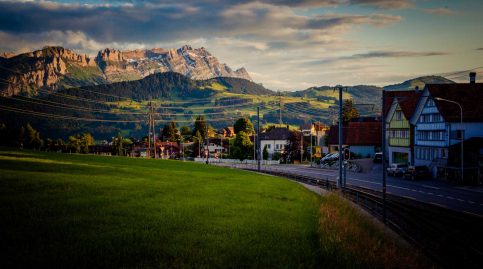 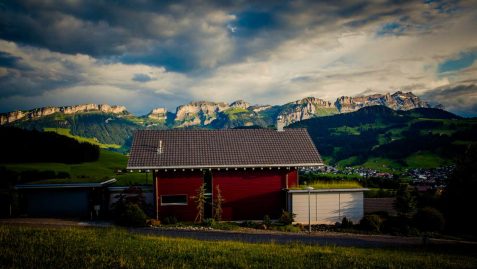 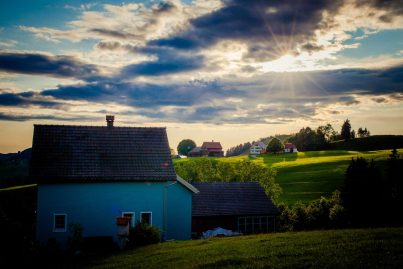 It’s a pleasant walk through the Swiss countryside, not too arduous, and the trains from here run regularly –as you would expect these Swiss trains are punctual and clean.

We bought the three day pass for Appenzell, it gives you access to a range of attractions in the city and surrounds, including museums, galleries and the cablecars. It may be a small town, but there is a lot to see so the three day pass is worth it if you have the time to stay. We stayed in a homestay organised through the tourism bureau in town. We literally turned up and asked for a room and the tourism office hooked us up in a lovely Swiss home.

We were here for two days – we were meant to stay three, but Jonathon’s conference finished early and he was keen to leave and we were happy to move on too.

Was it long enough? We saw everything we wanted to see in the two days and more.

Highlights: Meandering through the Swiss countryside, the Ascher gasthaus – everything really. It’s a gorgeous town.