You know sometimes you go to a place, not quite sure what to expect but willing to give it a go anyway?

You get there and you’re quietly impressed. It all functions just a little bit more easily than you thought it might, the people are that bit friendlier than you expected. Not that you had any real expectations, at least, you didn’t think you did. But now that you’re there, you kind of realise, maybe you did.

This was my sense of Mexico City.

I turned up in Mexico to host a tour with Two’s a Crowd. The tour was sandwiched between a South American tour – think Peru, Bolivia and Ecuador– and Cuba.

Mexico was up against some amazing experiences, Machu Picchu, the Amazon jungle, the Galapagos Islands and then, well, you know, CUBA. How could it possibly compete?

But here’s the thing about Mexico. Somehow it quietly gets under your skin. And when I say quietly, I actually mean at high volume. Our guide, Balam, warned me at the start of our tour that the country seems to be on steroids, everything is over the top – he said. From the music, to the colours and the street odours and the food spices, everything is turned up a notch.

“I think Mexicans are afraid of being bored, or worried that life might be dull,” he’d said.

“So we amp everything up.”

But the thing with Mexico is that it’s anything but dull. The city is a beautiful mix of modern architecture and rich colonial history. Mexico City was founded by the Aztecs in 1325, and the rich Spanish, Mayan, Oltec, Zapotec and Aztec influence is still evident throughout Mexico. And in the capital, historical monuments and palaces sit side by side with new state of the art skyscrapers – most of which have been built to resist the earthquakes the city is susceptible to.

Our tour starts with a visit to the pyramids at Teotihuacan.

About an hour and a half drive from the city centre, Teotihuacan is a UNESCO World Heritage listed site, built around 100 BC as part of a large ancient city. The sites are well preserved and offer a fascinating glimpse into the history of this part of the world. 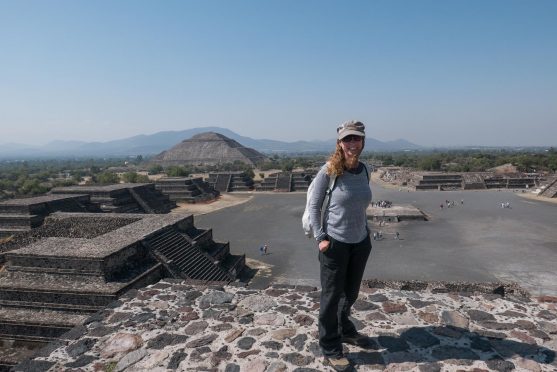 At the amazing Teotihuacan 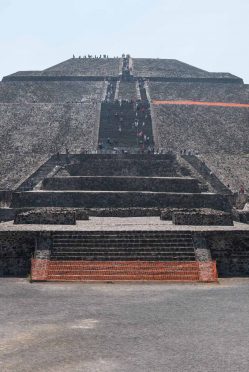 The impressive Pyramid of the Sun 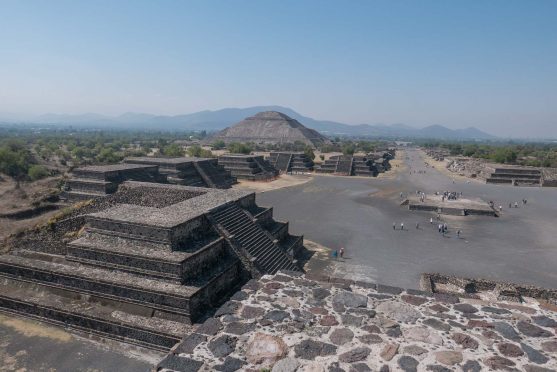 Avenue of the Dead at Teotihua

We walk up the sun temple and the moon temple, getting a commanding view of what must have once been a remarkable city in its own right. We look in amazement across the Avenue of the Dead, anxious to get back down and actually walk along the wide boulevard, retracing the steps of ancient civilisations.

Our guide points out the sacrificial stone – where a community member was sacrificed to the weather Gods each year in what was said to be a great honour and then view one of the few remaining sections still covered in paint to see how the city would have looked in its heyday. In a word, vibrant.

The walk up the temples is tough, the steps and steep and high. My tip (thanks to our trusty guide, Balam) is to crisscross your way across the steps, walking on a slight angle. Trust me, the views from the top are worth the effort. It’s only from the top that you get to see the true scale of the temples and the surrounds.

The next day we are up early for a tour of Mexico City centre. I’d walked the city on my own when I arrived, getting lost along the way and taking in some of the back streets. I felt entirely comfortable and loved the sites around me. I’d stopped at a taco truck to try a traditional Mexican taco for all of $1 – well worth it.

But with my group, we stop in at the National Museum of Anthropology to learn more about the history of Mexico. Our guide walks us through a history of the Zapotec, Mayan and Aztec cultures. It’s an impressive history, but the thing about this museum is that it’s all so beautifully designed. 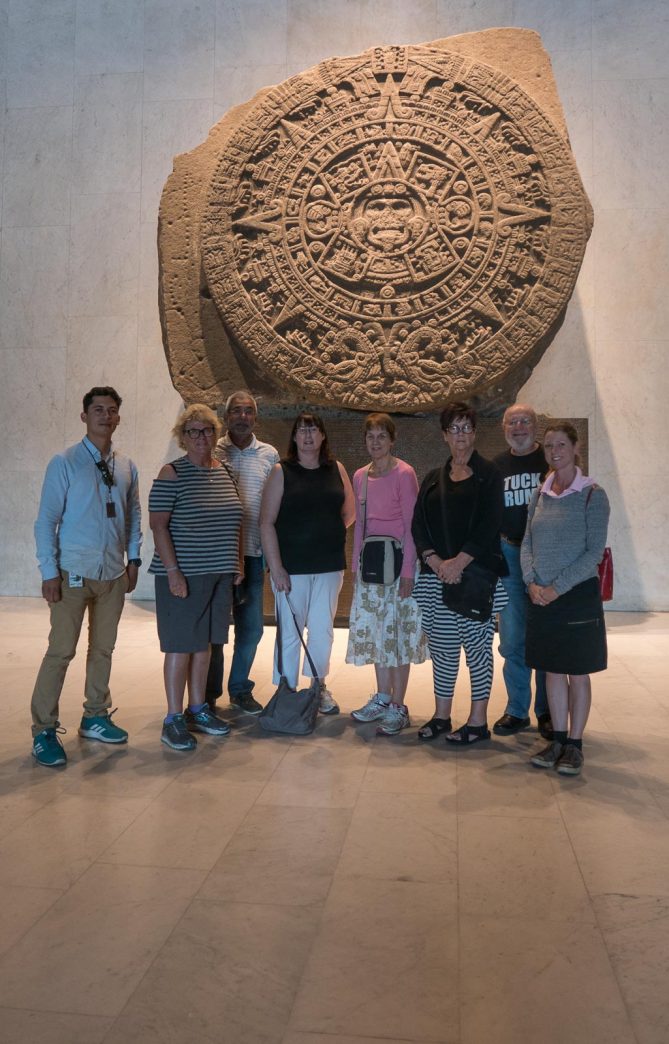 Inside National Museum of Anthropology with my lovely Two’s a Crowd tour group and guide, and my stylish shoes and socks… 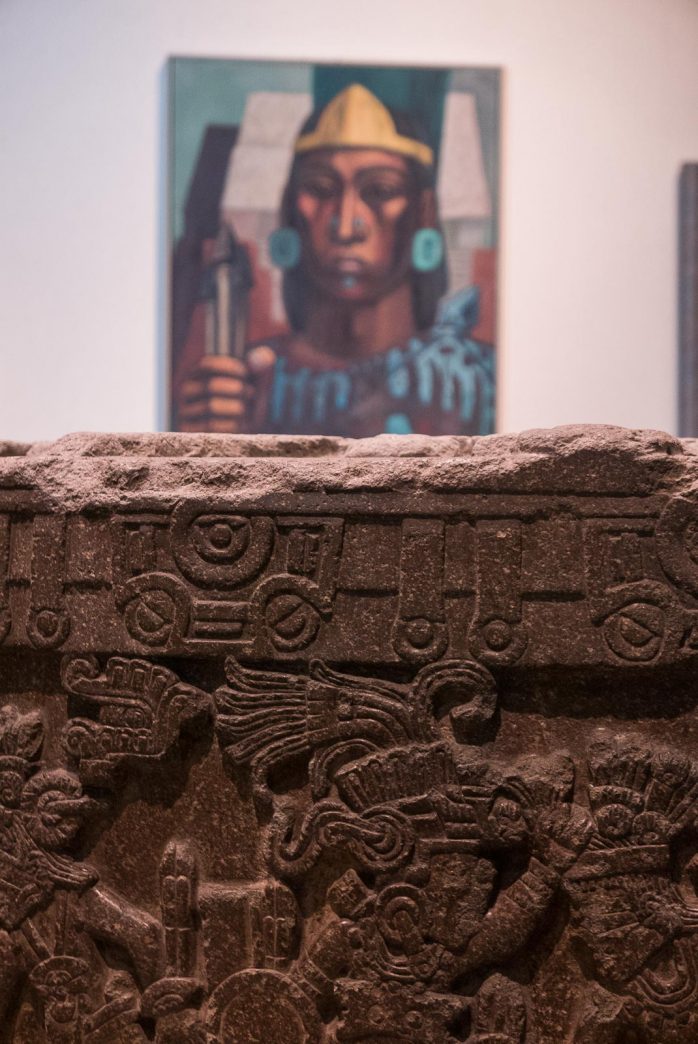 The building itself is stunning, and the archealogical artefacts are displayed in such a way that you are drawn in to each exhibit. Although it was built in 1964, the museum has a very modern feel to it. It’s a stunning way to display a remarkable history.

It’s perhaps not surprising the museum is impressive. Mexico City is serious about its culture. There are more museums in Mexico City than just about any other city in the world – 150, apparently.

We take a drive down Paseo de la Reforma – the main boulevard in the city centre, past the monument to Diana, the Goddess of Hunting and stop at the Angel de la Independence , which just happens to be perfectly surrounded by shards of light emanating from the sun’s position behind the few clouds in the sky. 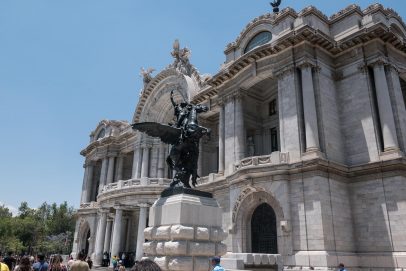 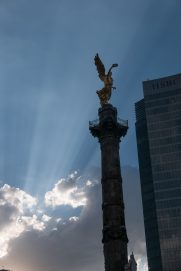 The Angel of Independence in Mexico City. 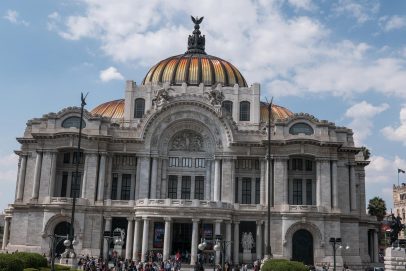 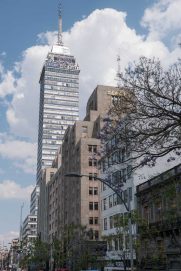 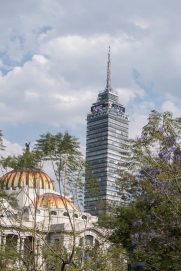 Views of skyline in Mexico City.

If you have the time, it’s worth stopping to wander through the Bosque de Chapultepec (Chapultepec Forest). The grounds are said to be one of the largest city parks in the Western Hemisphere at about 1695 acres. Compare that to Central Park in New York, which is about 843 acres or Hyde Park in London at about 350 acres. There is plenty to see and do, from open air art spaces to water fountains, amusements parks and nine, yes nine museums. You could get lost in there for weeks

As soon as we have some spare time, an afternoon to wander through the city centre, we head straight for one of the Hop On Hop Off Bus stops, select a tour route and sit in open air luxury learning more about the city centre and seeing the sites from up high. Just be careful – some of the power lines here hang low, very low!

On our last night in the city our guide takes us to Plaza Garibaldi to visit a Mariachi band. We’re not disappointed, particularly when the band strikes up La Bamba and we all hum along to the one tune we know.

Like this post and want to use it for your own guided tour of Mexico City? You can now access it offline through GPSmyCity. Just go to this link to download it. For a small cost you can even download the story with GPS coordinates so you know exactly where to go! It’s kind of like having a map, a Lonely Planet guide and a travel buddy in your pocket.

We stayed at Hotel Regente City

Was it long enough? There is so much to see in Mexico City – aside from all those museums, I’d stay a lot longer – how long have you got?

Highlights: Everything! The Mariachi band, the architecture, the history…

*This was part of a tour I hosted with Australian based tour company Two’s a Crowd.