After our stint volunteering in Buliisa, my sister and I decided we really should see more of the wildlife in Uganda and in particular, we were very keen to go gorilla trekking. Afterall, there are only about 800 gorillas left in the wild and you can only seen them in Uganda, Rwanda or the DRC

So while it was a 21 hour drive from Buliisa to Bwindi, we figured it would be well worth the effort – plus we’d get to see a lot of the countryside along the way.

I’m pretty certain the length of the trip had more to do with the state of the roads – there’s a reason they joke about the African massage whenever you drive anywhere here – and the constant slowing down for small villages and less to do with the actual distance.

We managed to get a lift from Buliisa to Entebbe where we stayed overnight.

The lovely Richard from Matoke tours, who had driven us on tour through Murchison Falls, was to be our guide once again and picked us up nice and early for the long drive to Bwindi. 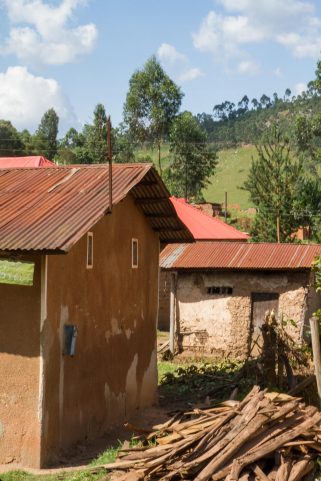 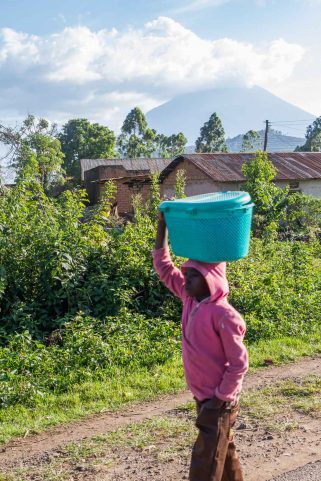 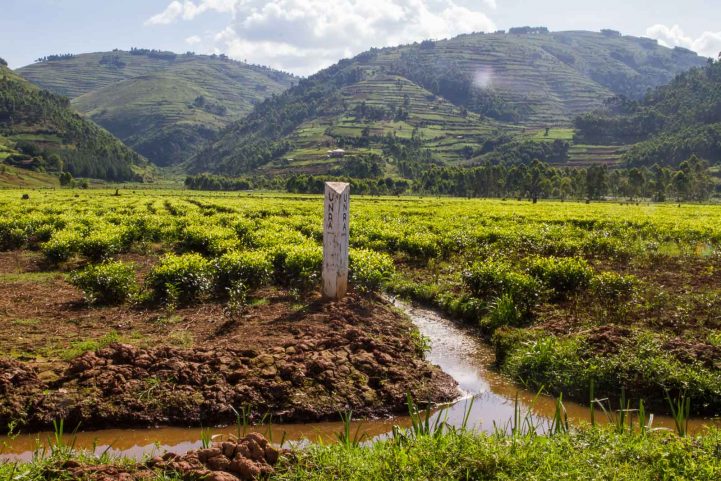 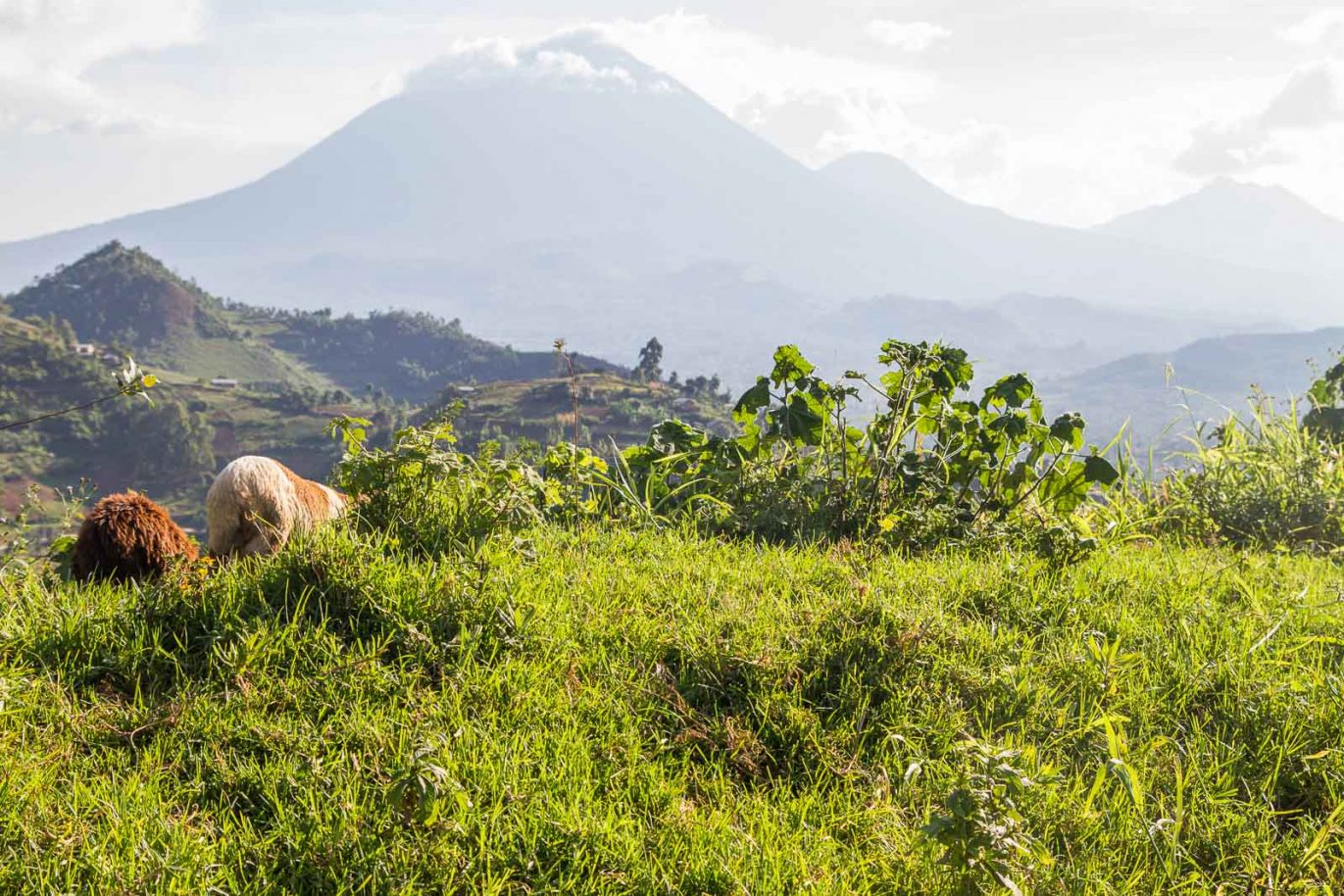 And what a drive it was. Bwindi is close to the border of the DRC and Rwanda and up in the mountains. It is also very lush and green with giant lakes dotted throughout the journey. Richard’s driving skills were well and truly put to the test as we clung to the narrow dirt roads winding their way around mountains and past the lakes.

But that was nothing compared to the driveway into Mutanda Lake Resort, our home for the next two nights. Straight down! Which was ok, but I couldn’t help but wonder whether our van would make it back up!

Mutanda Lake Resort is set on, well, Lake Mutanda and has stunning views across the Virunga mountain ranges, including some very impressive volcano peaks.

We were also lucky enough to see an otter or two in the lake from our lodge. We had about an hour’s drive to the visitors’ centre at Bwindi where we met up with the rest of our group for the gorilla trek.

After a quick introduction, during which we were warned that we might have a short or a long walk – there really was no telling – and there was no guarantee we would actually see gorillas, we set off in our vans for the closest gate to our trek.

Evidently trackers remain with the gorillas 24/7 so they can keep a protective eye over the endangered animals. It also means the tour operators know roughly where the gorillas will be. 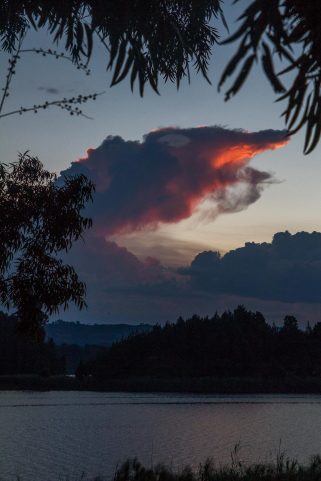 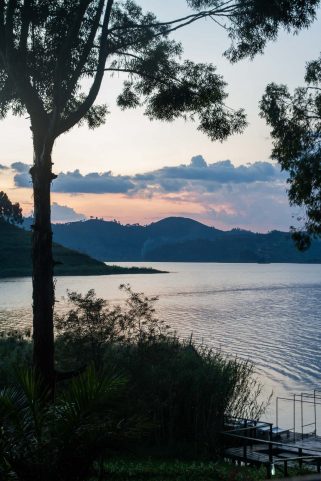 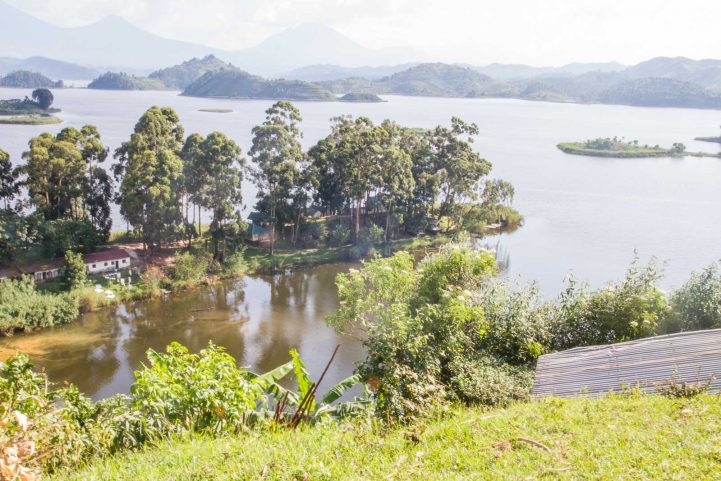 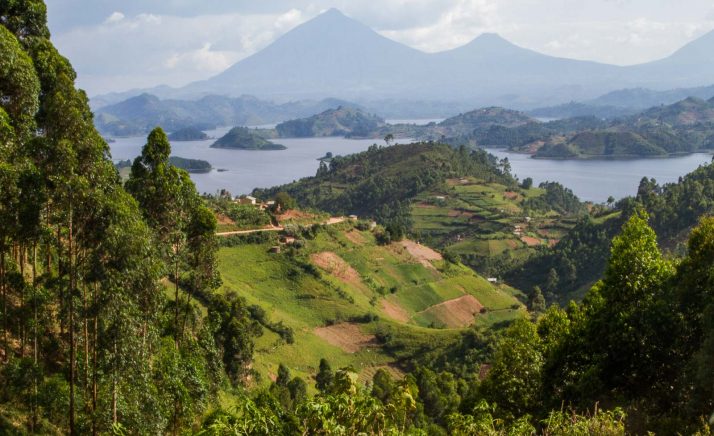 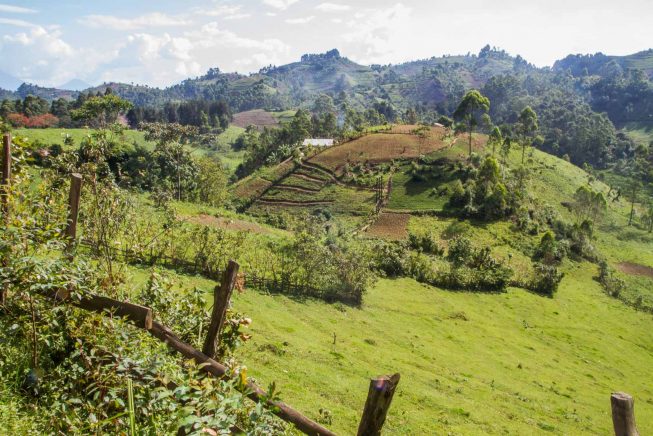 And soon we were off walking. Up and down, up and down. It is not hard to see why they call it the Bwindi Impenetrable Forest – our guide pretty much had to slash a path for us through the trees.

We had been advised to hire a local porter to help us carry our bags and to take sticks with us. While we definitely wanted the porters – at about $20 each they were well worth it – we protested the walking sticks.

But 10 minutes into the walk and we were glad we’d relented. The sticks helped us get up and down the hills and saved us from falling on more than one occasion.

We crossed a lake and marched up and down more hills, through ever-denser forest, but still no gorillas.

We stopped for a bite to eat and started to wonder whether we would in fact get to see any gorillas and then we were off again, up and down more hills, back across the lake and up the other side.

And finally our guides told us we had to leave our bags with our porters and take only a camera.

We knew we must be close and sure enough it wasn’t long before we caught sight of our first gorilla – a teenager, who actually reached out and slapped one of our guides as he ran past our group.

Up ahead we could see a silverback and a mother and her baby. In total there were about nine gorillas in this group, including two silverbacks and a few babies. 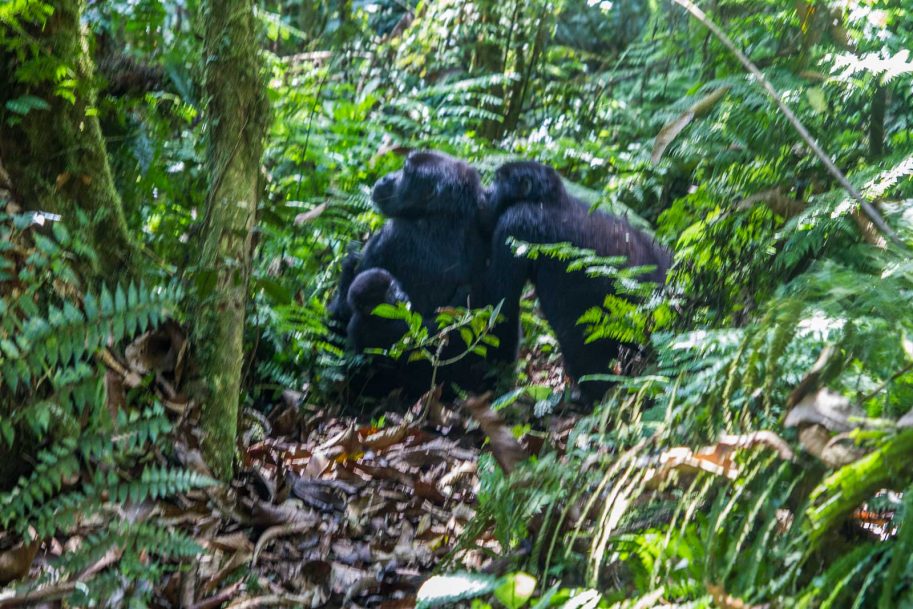 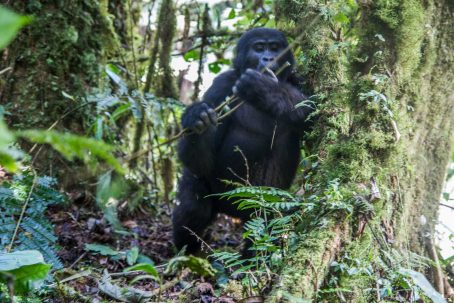 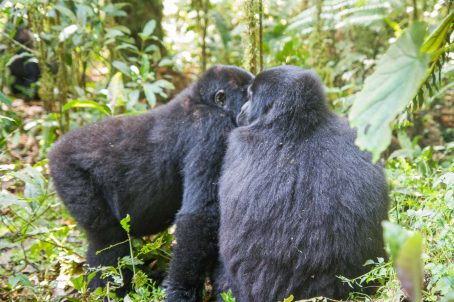 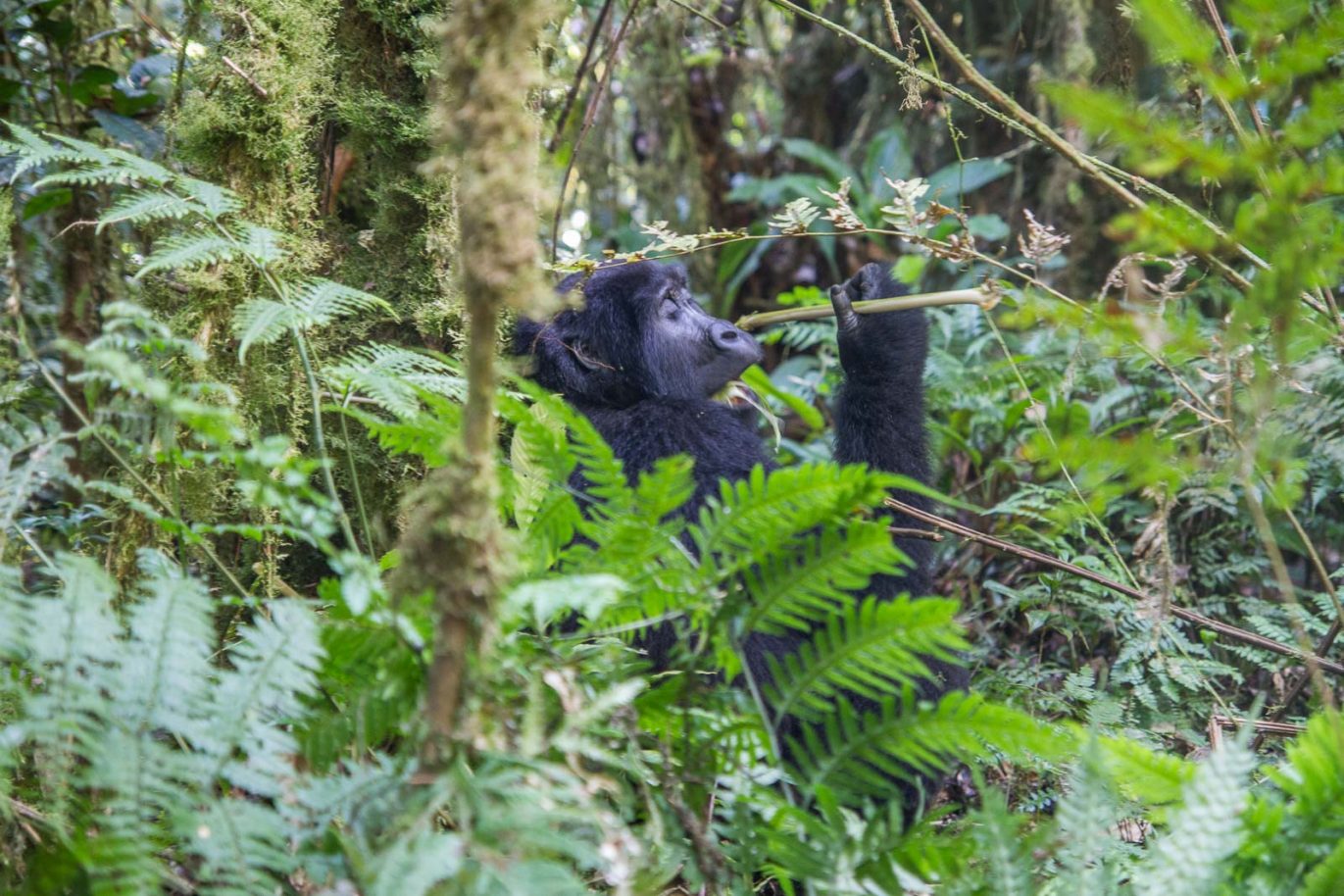 They were on the move through the dense forest. We followed their every step until finally they stopped to rest in the thick of the trees.

Tour groups are only allowed one hour with the gorillas but it is a magical hour. Watching these amazing creatures at play is such a beautiful experience. I had to keep reminding myself to put the camera down and actually soak in the experience.

The group we saw barely even acknowledged our existence – but that’s not always the case. Our guide told us a story of one woman who had a baby gorilla come right up to check her out. Another person on our tour told a story of a man who had gone gorilla trekking dressed in a grey t-shirt. He must have been perceived as some kind of threat to one of the silverbacks, as the gorilla became very agitated with him. 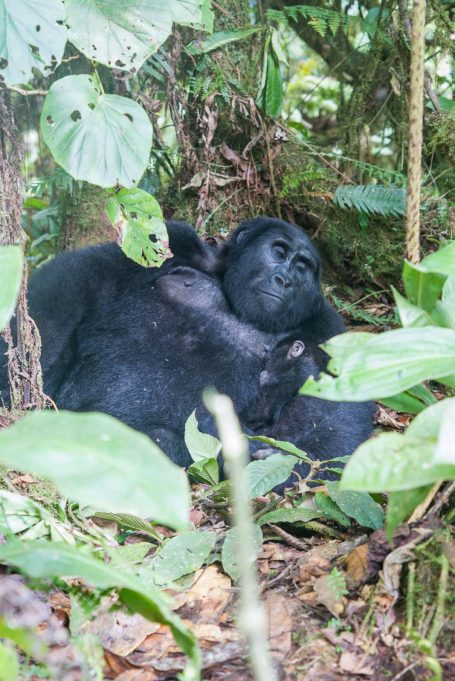 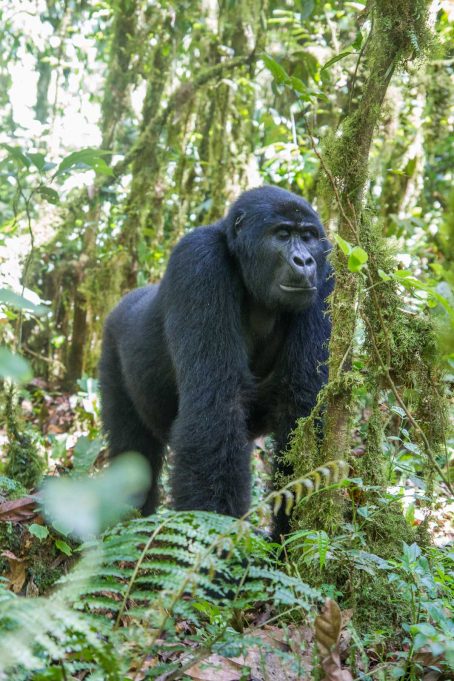 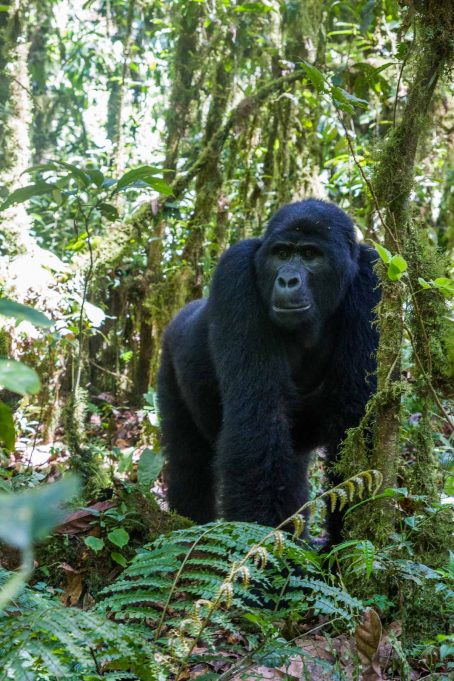 The guides had to cut the tour short for fear the silverback would attack the man.

Alas, we had no such experience, instead we observed and photographed. Content that after so much walking, we finally got to see the gorillas.

It was over all too soon and we had to start the long walk back – up and down, up and down again.

In all we walked about 13 kilometres through some of the toughest terrain I’ve ever encountered, but it was worth every step!

We stayed at the Mutanda Lake Resort – a beautiful tented lodge that is more glamping than camping.

Was it long enough? We were here for the gorilla trekking so it was long enough for that. But the whole area was beautiful and I’m definitely planning to go back!

Highlights: The gorilla trekking was amazing. It’s expensive but if you can, go – it’s a once in a lifetime experience. The views over the lakes and the mountains are breathtaking. 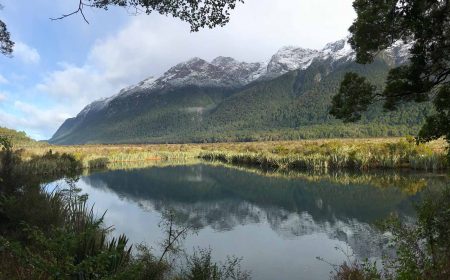 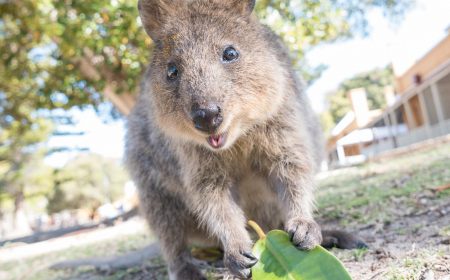 We got rid of all our stuff, moved out of our apartment and were just about to embark on a three-year, round-the-world adventure (what we like to call the Middle Aged and Irresponsible Tour or MAIT).
But then Coronovirus hit and had its own plans for the world. International borders closed and travel was restricted.Like so many others our plans were derailed.
We got stuck living in the spare room at our parents’ place. So, we bought a van, ready for a four-wheel drive adventure around Australia.
But then coronavirus hit harder, state borders were closed, travel was definitely off limits.
Now we’re plotting, planning, dreaming and waiting for the day we can travel more than five kilometres beyond our front gate.
Luckily, we’ve got the memory of these past adventures to keep our travel dreams alive…

Looking at you looking at me… We love African wi

We got up early to watch the sunrise over Thredbo

We’ve lived in the #yarravalley all our lives bu 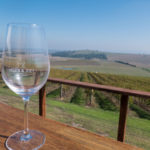 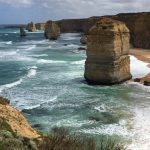 Tickled by a sea anemone on the Great Ocean Road 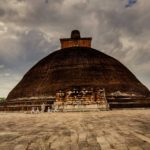 Discovering the Beauty in the Sacred City of Anuradhapura