Back to the Natural Beauty of Queensland’s Fraser Island

Last time we visited Fraser Island, off the East Coast of Australia, we were stuck with no four-wheel drive vehicle and just three days to see as much as we could.

It didn’t work well for us. We had thought we would have a car appropriate for the terrain, we had booked one before we left Melbourne, but when we went to pick it up in Brisbane we were advised we couldn’t take it off the mainland, so definitely couldn’t take it on to Fraser Island. We weren’t prepared to risk the insurance, so took a smaller car instead to get us up to Hervey Bay and figured we’d work it out when we got to Kingfisher – our accommodation.

We didn’t. All tours of the island were booked out. We did manage to squeeze in a whale watching tour (amazing, the best whale watching we have experienced). And so, with no other option, we walked to Lake McKenzie – about 24 kilometres return through sand, with dingoes patrolling the area. We survived the walk, had a quick swim and managed to get back to the hotel just before it got dark and the only dingo we saw was at Lake McKenzie. It was an experience, but not one I would recommend.

This time we visited the island with friends, who fortunately had an extra four-wheel drive we could borrow.

So here we are again. And it certainly is much better with a car to travel around in.

This time we got to see the Maheno shipwreck, Eli Creek, the Champagne Pools, The Pinnacles and Red Canyon – and that was all just on the first day.

Let’s start with the Champagne Pools, which is where we started and then slowly wind our way back down to Eurong, stopping at the various sites along the way.

We arrived at the pools about 10.30 and it was packed, four-wheel drives everywhere alongside the odd tourist van.

The pools are essentially rock pools right on the shoreline on the north of the island. They get their name from the swells washing into the pools creating a bubble or “champagne” effect.

For us though, the most amazing thing about our trip to the pools was seeing whales at play not too far off shore.

It started with a splash, but soon we saw the tail come out, followed sometime later by the body.

In all we saw at least three or four whales from the Champagne Pools and from Indian Head, just around the corner.

In one sighting we saw two whales side by side.

Indian Head, a short drive back down the island is well worth a stop. It is a short walk up the side of the mountain, but the views from the top are spectacular, and of course there is always the chance of seeing a whale or two – an added bonus.

From here we also saw a stingray and allegedly a shark – someone pointed that out to me and while I could see something moving around, really it could just have been a large fish.

Both are interesting, neither blew us away.

We had visited the Maheno shipwreck the night before, but stopped for another look and some more photos.

I found the shipwreck fascinating, it is close to the shoreline so you can walk right up to it to check out its decayed state up close. With nothing but sand and ocean around it, the shipwreck provides a stark contrast to the stunning scenery.

And again, despite stopping at Eli Creek the night before, we stopped again so that Adrian and Nigel could swim along it. Eli Creek is a freshwater stream feeding water from many kilometres away into the ocean. It is surrounded by forest, but a path takes you alongside it and you can cross it by bridge at various spots along the way. The thing to do, it seems is to jump in the water and let the current drag you all the way along to the main beach, which is what Ade and Nigel did. It was too cold for me (I’m a bit of a wuss, truth be told), but it did look like a whole lot of fun.

While the distance from Eurong to Champagne Pools isn’t far, driving through sand and water banks, means it takes a lot longer than you would expect. We were gone all day, and other than an hour’s stop at the pools none of our stops were for very long.

But Fraser forces you to take your time and enjoy the scenery around you.

Our first lake this trip was to Lake Waddy – a lake that is slowly being eaten away by a sandblast.

Walking in from Eastern Beach you can either walk via the sandblast or a made path. While the made path sounds easier, I don’t think it actually was! This way you suddenly come upon the lake and there is no way around but to walk through the lake to get to the main “picnic” area.

The water isn’t deep, so it’s not arduous.

The water is brown in colour, not the stunning blue of Lake McKenzie – one of the best known sites on the island – but the bank of sand leading down into it gives it a really interesting look. It is well worth walking up the sand bank to view the vast amount of sand there – it really is like standing on a dessert.

For old times sake we had to go back and check out Lake McKenzie of course – this time we managed to go by car, much easier!

We arrived late in the day when most people were packing up to go, so didn’t really have time to take in the surroundings. It was much smaller than I had remembered it and not quite as striking, perhaps I had built it up in my mind, or perhaps the journey to get to the Lake last time had played a part in it seeming that little bit more spectacular. I can’t say we were disappointed, it is beautiful, but it wasn’t quite as awe-inspiring as it was on our first visit. We stayed at the beautiful Kingfisher Resort. 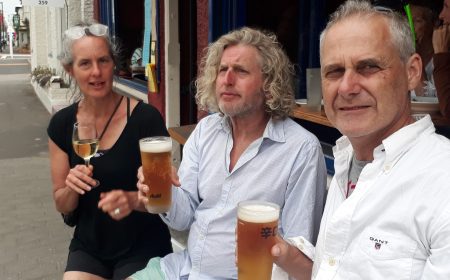